Skip to content
Posted on February 17, 2022Author haoN No Comments on My Reading Project.

In English class we had to choose a book to read. After reading it, we had to choose an artifact to make of it. I had the book, “Hold Fast” by Blue Balliett. The book is about a family that really liked poems and words. The main characters of this book include: Dash (the dad), Sum (the mom), Jubie (the little brother to Early), Early (the main character and sister to Jubie).

What happens in the book is that Dash suddenly goes missing. He worked at a library. A man approached him explaining he wanted vintage books that aren’t needed in the library and that he would pay Dash and his colleague to deliver books to his house. What they didn’t know is that a long time ago there was a crime ring that decided to rob a diamond storage place. To not get caught they hid the diamonds inside the spines of old books and the man was part of the crime ring that wanted the diamonds. Now that you’re all caught up, back to the “present”. Dash didn’t know about the diamonds, so he thought he was just delivering old books and getting some extra money for his poor (not a lot of money, not sad) family a few weeks into the whole thing. Dash decided that he wanted to keep a book. He thought they would be fine with it if he just sent them some money to make up for it, but his colleague suspected something was fishy with the whole program. So, he didn’t pass on the money from Dash to the man’s house. This was a problem because the specific book he took had a lot of diamonds in it. The crime ring kidnapped Dash, leaving the family heartbroken and without money. Early remembered a time she saw Dash slipping money inside a book.  She told Sum and then they were doing ok because they had some money. Then the robbers came (they were lower down in the crime ring) and were just told to steal things from their apartment, not knowing that the crime ring wanted the specific book with a lot of diamonds that the family had. They came and stole everything but the book. The crime ring had Dash, which the family wanted and the family had the book that the crime ring wanted.

Rules of the Board Game

That brings me to my game plan. I chose a board game for my project because this book was good for making a board game because of how the family wants Dash but the crime ring wants the book. Basically I created a game board with a game for each team. There are two teams called crime ring and family. On each team there are three pieces. Each team is trying to get all pieces to finish their side of the game before the other team.  There is the shelter where the family is and the “rich guy’s house.” You need to roll 3 or under to get a piece out of your base to start moving it around the board, for both criminals and the family. The criminals are trying to get the books with the diamonds inside of them and the family is trying to get Dash (the dad). When you’ve got back to your base with all three pieces, you know you’ve got the books if you are the criminals, or Dash if you are the family. Because the family has the book and the crime ring has Dash, you need to get across your side and the other side of the board and back to complete what each team wants. To move across the board you need to roll the dice and move the number of places the dice says and move whichever of your three pieces. Across the board there are also cards that can either slow you down or make it easier to get to your goal

I could have done this project better by spending more time on the actual board design.

I spent a lot of time on writing this project.

I feel the game is similar to the book. I also thought that a board game would be the best way to share what the book was about. I think it would be more fun to learn about the book by using a board game rather than doing another artifact.

This is a picture of the game (the picture doesn’t show where you pick up cards because it is outdated the rest is correct): 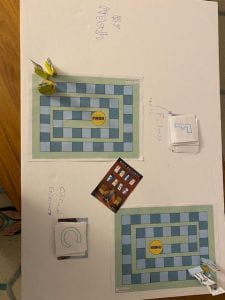 That is my book project thank you for reading