Skip to content
Posted on December 4, 2020Author haoN No Comments on Multiplication Hacks :>

If you are not understanding multiplication, I have some tricks to help: lets say your question is this 2×4. You think it’s either two four times or in my opinion the easy way is four two times. Another strategy is this: let’s say you know your fives better than your eights and your question is 8×5. You could switch it around and make it 5×8. Then instead of eight five times, you make five eight times. For your ten times tables up until 9 x 10, you write down the first number and then put a zero behind it. Keep reading if you don’t understand or just keep reading anyway. Back to the trick: For example, 10×4 – you just add a zero to the four so then:10×4<– add a zero =40. For my last trick ask for A MULTIPLICATION TABLE :O (it’s magic, but you might need to zoom in). 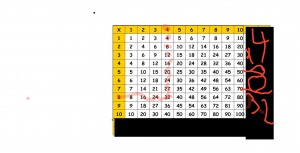 If you can’t see, it’s four times eight. I took the four and the eight and drew lines from them until they met up. Where they meet is the right answer. If you’re having trouble lining them up here’s trick for that: For example, if it’s 4 x 8 you make the four go down eight times and make the eight meet up there. Those are some tricks you can use to help you with your multiplication.